Since getting my Silhouette Cameo

for Christmas, I have really enjoyed using it to kick up my crafts. There are so many possibilities! It can be overwhelming for a newbie, and I’ve read about people who keep their Silhouette in the box for months (or longer). Well, let me tell you — take out the machine, install the software on your computer, read the manual, and just play around with it! Will you mess up your first project or two? Maybe. Probably. But that’s OK. That’s how you learn. Isn’t that what we tell our kids? It’s totally OK to make mistakes! Don’t let the fear of failure keep you from having fun.

Here’s a picture of the first vinyl project I made. (Yes, I did go back and fix the missing apostrophe!) This was just using the Recollections brand vinyl from Michael’s. I wouldn’t say the vinyl is amazing, but the cup has held up for a few months now, and in a pinch I would buy it again. 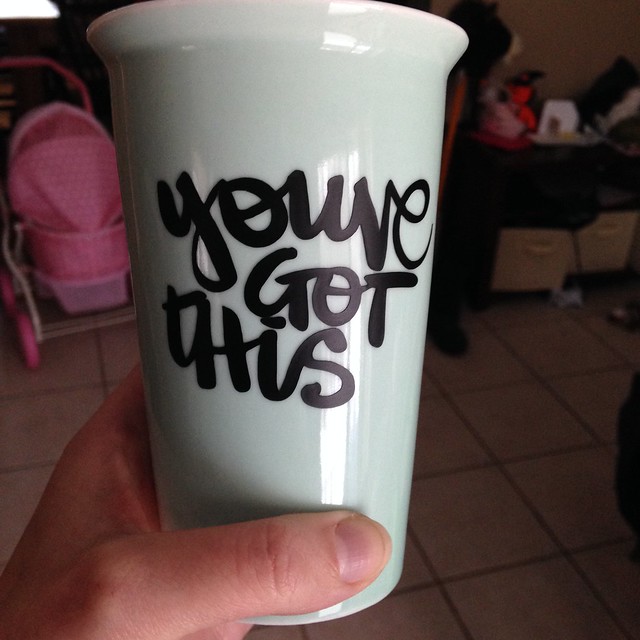 After realizing that cutting vinyl wasn’t actually terrifying, I decided to buy the Craft E Vinyl Assortment of glossy permanent vinyl from Amazon

. It was easier and faster for me to purchase this instead of tracking down Oracal 651 from a vinyl retailer and I love this stuff! It weeds easily, adheres well, and if you have Amazon Prime in two days you’ll have it in your hot little hands. I used the Craft E Vinyl to create this sign for my dad to hang in his workshop. 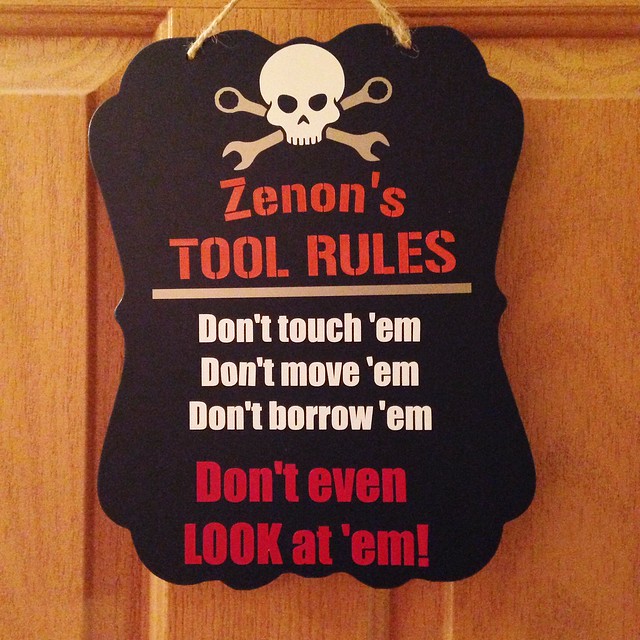 For St. Patrick’s Day, Laura needed to wear green to school (obviously!). I still had not ventured very far into the world of HTV (heat transfer vinyl), and all I had was a sheet of metallic gold Cricut vinyl I bought on sale at Joann’s. But it did the job and my little leprechaun made it through the day without being pinched! For this design, I simply found the shamrock wreath online, brought it into the Silhouette Design Studio, traced the image, added my text, and was ready to go. (When cutting vinyl to iron on to clothing, don’t forget to mirror it – I made that mistake!) 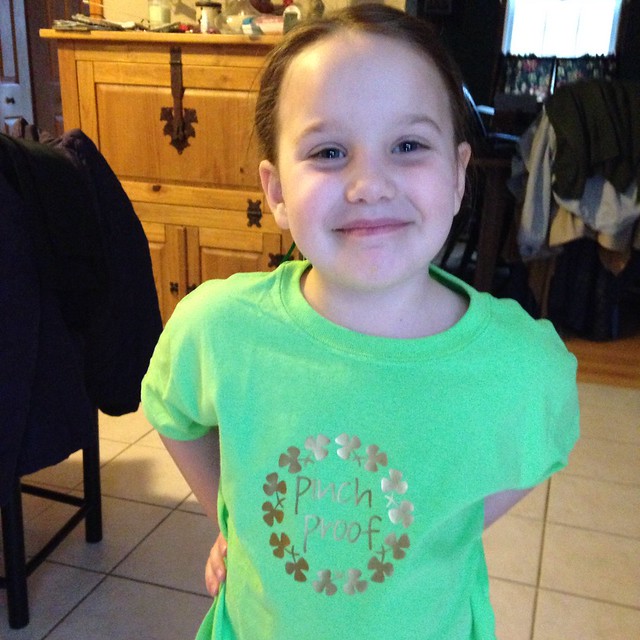 Next is a travel mug I made for Drew’s birthday gift. After Christmas, Target had 2-packs of Contigo brand travel mugs on clearance, so I scooped up a package. My husband is a huge fan of G.I. Joe comics (and even has a Cobra Commander Halloween costume), so this was a no-brainer. I love how it looks, even thought it was incredibly simple! 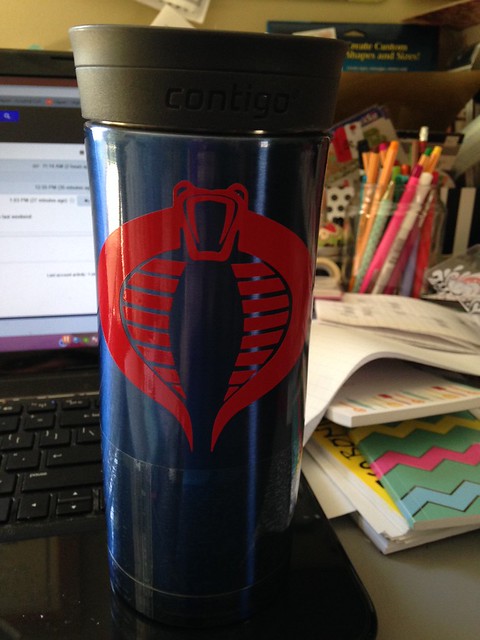 After deciding that I was going to want to delve a little futher into making custom creations that used HTV, I placed an order for some better quality supplies. First order of business was to make myself this shirt. Yes, I do think I am very punny! 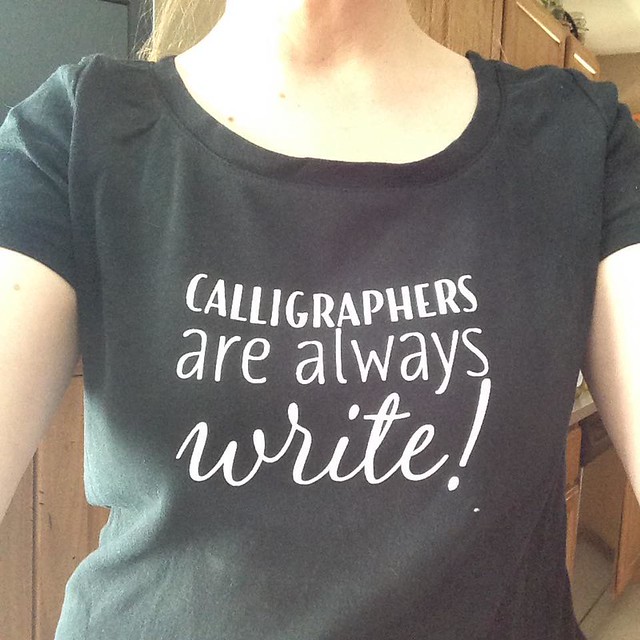 And last I’ll share the Mother’s Day gift I made for my mom. Glass cutting boards were all the rage in the FB groups, so I picked one up at Dollar Tree and made this design from scratch. As you can imagine, it’s not that easy finding anything that says “Babci” on it, so I think she was happy with it. This was another project that required flipping the image before cuting it because you actually stick the vinyl on the underside of the cutting board (that way it is still functional). 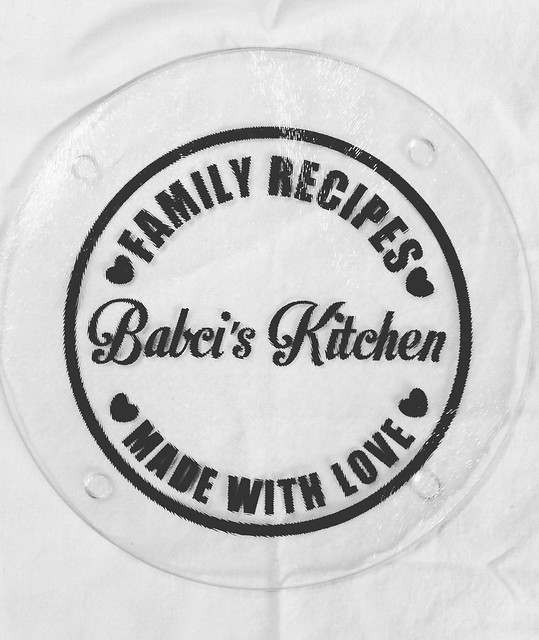 There are so many other project ideas in my head! I’ve also used it quite a bit to cut complicated shapes out of paper (that’s how I did my son’s Confirmation invitations). And I also use it to cut out envelope templates. Again, it’s just faster and easier than doing it by hand. I look forward to sharing more ideas soon!

Woah, wasn’t it just Christmas? And here we are, the first month of 2016 done and dusted. That’s just crazy. And try as I might to have been a better blogger, well… LOL! We know how that goes. I’m going to attempt something different for February though and try to make blogging part of my evening routine. Hopefully that will help.

I also am going to try to get back on track with my “Freebie Friday.” I’ve had a number of people write and tell me how much they liked what I have up here already, and if I’d consider adding more freebies. How can I say no to that? So I will tell you that I already have this week’s totally free planner sticker printable queued up and ready to publish on Friday morning. I won’t say what it is, but I will say that I use these particular stickers a lot and I am hoping they will be useful for a lot of people!

OK, so what else can I tell you? Things have been moving right along and I have a busy week ahead putting all the finishing touches on our Cub Scout Pack’s Blue & Gold Banquet. So hard to believe that Noah will be serving up the pancake breakfast with the rest of the Boy Scouts a week from today! I think I have everything under control, but I’m sure there will be something that goes askew. There always is.

I have just started playing around with the Silhouette Cameo I got for Christmas. I’ve made a couple sheets of planner stickers, but because my printer really needs the ink changed, and I am really lazy about doing it, I have not done too much with that. Today, however, I attempted my first HTV (heat transfer vinyl) project! I wanted to make a Valentine’s Day-themed shirt for Laura. I wanted to keep things really simple for my first try (i.e., no complicated designs to weed out the extra vinyl). I just purchased an image from the Silhouette store and hoped for the best. It’s not perfect, but she loves it and I was just happy it all basically worked out! 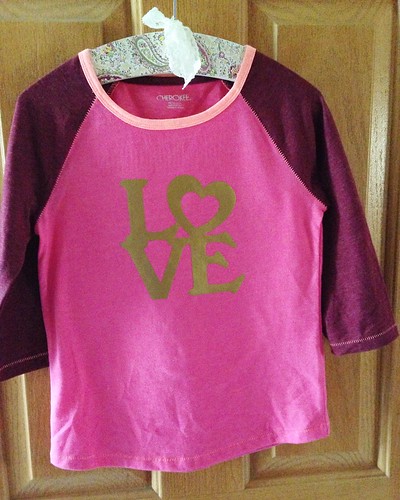 As for crochet, I picked up my Stitchation afghan from two summers ago. I have to get this finished because it is now a thorn in my side. I have invested so much time into it already that I just need to work up the last few squares and put it all together. Also, for February, I’m going to be making a mood scarf. I didn’t purchase the kit because I have a lot of stash yarn, so I will be using that. Tomorrow I’ll share my colors with you! (See? I’m giving myself a reason to blog.) 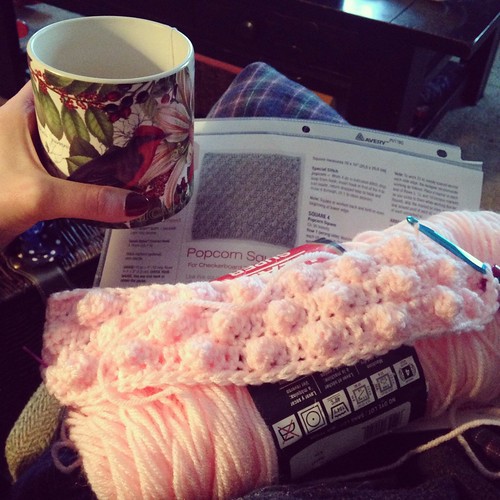 I also, on a whim, because I was in a bad mood the other day and needed shopping therapy (LOL) I purchased on clearance at Michael’s… a Happy Planner. I know, I know! I have been an Erin Condren girl for years. What would possess me to do this, especially since I am pretty happy with the hourly layout I’ve been using since December? Well, I am considering switching for next year because of the disc system and all of the fantastic accessories MAMBI has for this planner. But when I found out that they are releasing a punch (tomorrow, actually), I thought it was a game changer. So, for the $8.00 it cost me, I felt it was worth it to get a feel and see if I really want to jump ship. I’ll be using this planner for February. 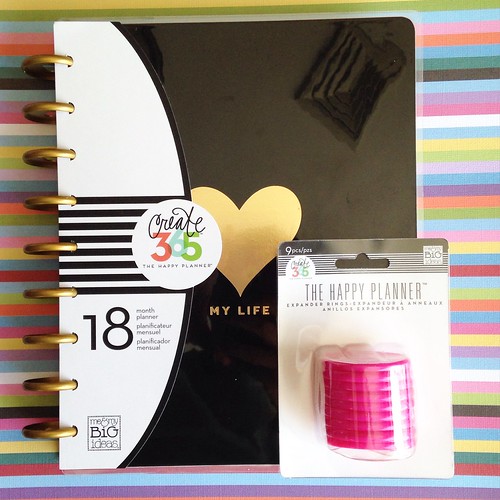 OK, well this is getting long. January was kind of a blah month. I’ve missed the snow. I have been eating a ton of junk food. And I’m still relying too heavily on my iPhone’s camera. I have some pretty lofty goals for February, but I’m ready for it!