I received a free copy of Real American: A Memoir in exchange for an honest review. All opinions are my own. 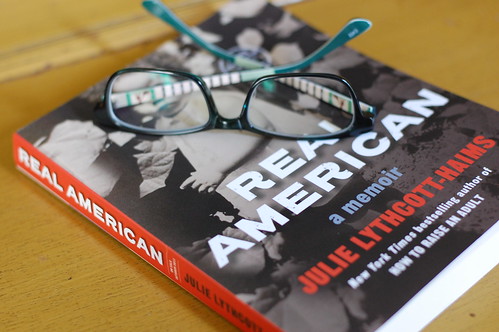 As a librarian a lot of books find their way across my desk, as you can imagine, but I am drawn to biographies and memoirs and always have been. I love learning about people’s individual histories, and Real American: A Memoir is no exception.

Julie Lythcott-Haims is the daughter of a white British mother and an African-American father. Julie was born in Africa in 1967, but her family moved to the United States when she was very young. This book chronicles her life as a bi-racial young woman in the 1970s, while living in Palisades, NY, and Madison, Wis. The book takes us through many pivotal life experiences that almost everyone shares — playing with neighborhood kids, going to prom, getting that college acceptance letter, navigating college life, experiencing love and disappointment — universal moments.

It didn’t matter that her father was an accomplished physician (and Assistant Surgeon General of the United States in 1977) and that her mother was loving and encouraging — racism was a fact of life that Julie could not escape. After graduating from Stanford University, Julie married a Jewish man, adding another layer of complication in her quest for self-understanding.

Lythcott-Haims writes with honestly and vulnerability. I did not grow up in a very diverse town, so I found many of Lythocott-Haims’ experiences eye-opening. The author spent a good deal of time struggling with issues of race and identity — what does it mean to be mixed race and how do you fit in, especially as a young adult during that time period? — and to ultimately moving toward healing and self-acceptance. We all can relate in some way to being an outsider, or not fitting in with the people around you. When we are in high school and college, even the most average person (whatever that might mean to you) tries to figure out who they are and where they stand. But the author’s struggles were much more than average. 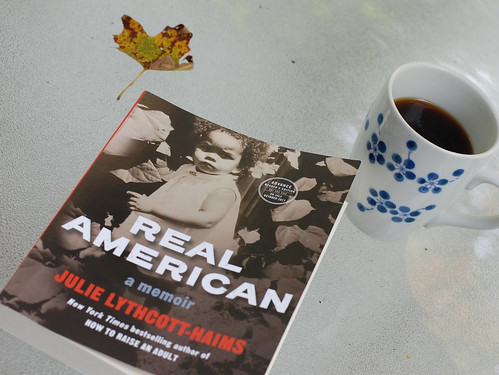 Real American: A Memoir wraps cultural moments (from seemingly simple things like watching “The Cosby Show,” and noting important movies to reflecting on Hurricane Katrina, the election of President Barack Obama, and the impact of Black Lives Matter ) around the author’s personal life. While reading I couldn’t help but reflect back upon where I was during these time periods and what I was doing. While reading this book I felt like the author was talking to me. Her writing style is so personal that it draws the reader in immediately. I soaked up every word, and I know it is a book I will go back to and read again. 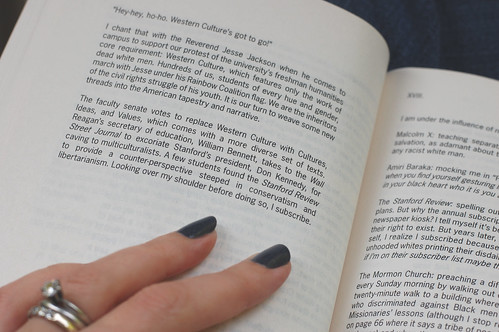 Real American: A Memoir is insightful and poetic, raw and honest. I think that this is an important book to read, especially given our current political climate. There’s no denying that the world we live in is racially-charged and I think that more than ever, we need to really try to know and understand each other. Whether or not you consider this book out of your “comfort zone,” I strongly encourage you to pick up a copy because it will no doubt have a lasting effect on you. Learn more about the book on Real American: A Memoir’s Publishers Weekly page.

Win A Copy of Real American: A Memoir

Giveaway details:
Prizes: One of 10 copies of Real American: A Memoir by Julie Lythcott-Haims
Dates: September 1 – September 29, 2017
Entry: Readers may enter the giveaway via the widget and by posting ONCE to Twitter and including: @DeanJulie and the hashtags: #RealAmericanMemoir and #CLVR
Notification: Winners will be randomly selected and notified by CLEVER by October 6, 2017
Terms & Conditions: Age 18+ | US resident only | Only one winner per household

I was selected for this opportunity as a member of CLEVER and the content and opinions expressed here are all my own.