Well what do you know? It’s Monday. Again. The weekend flew by over here! Sadly, the week is not off to a great start. It’s just one of those days when everything is going badly. I dropped L. off at camp this morning and head out to grocery shop while she was there. Half-way to the store I realized that I forgot my list and my cell phone at home on the kitchen counter. By this time, I’d driven too far for it to make sense to turn back. I wasn’t able to get a few of the produce items I really wanted. Traffic was annoying. I grabbed a quick take-out lunch for us to eat at home to make things a little easier, and then when I was unpacking the bags noticed that they forgot to include part of our order.  And now J. just came in to let me know that a lollipop was melted to the table.

Plus, our a/c still isn’t working. They aren’t sure yet what the problem is, but parts for the first scenario have to be ordered and we don’t have an ETA.

Ugh! Just ugh. Hopefully it’s just “a case of the Mondays” (to quote Office Space). The rest of this week just has to get better! Anyway, on with Happy Homemaker Monday. As usual, I’m linking up with Sandra.

On the weather front:

Let me just say this: I am a  big freaking baby in this hot weather. I don’t do 90 degrees and I don’t do humidity, and we will be plagued with both this week. Ugh. I’m already cranky and we’re not even in the thick of it!

On my bedside table:
I have a stack of library books, but they are mostly lettering and calligraphy books. Yes, I’m learning calligraphy — focussing on Copperplate, mostly, but also having fun with more casual lettering styles.

On my TV:
Actually, we’ve mostly been watching bad horror movies, or general “B Movies” at night. Last night we watched ThanksKilling, which was hilarious! I haven’t really found a great new show to watch, so I’m open to suggestions.

On the menu for tonight:
Grilled steak, potatoes, salad, and either green beans or broccoli.

On my To Do List:
Laundry! Ugh, I’ve let it get out of control. I was doing so well. One load per day, start to finish. I don’t know what happened, but I need to get everything I currently have folded and put away and then get back on track. Also, vacuuming, bill paying, and working on some organizing projects around the house.

Looking forward to:
Seeing my niece at the end of the week! She’s coming up for a few days — “Camp Ciocia” is what I’m calling it, LOL! (“Ciocia” is Polish for “aunt.”) L. is thrilled to pieces to have a sleepover, and I’m hoping we get to pack in a bunch of fun activities.

Homemaking Tip for this week:
Take advantage of awesome grocery store sales and start creating a freezer and pantry stash. It will make meal planning much easier, and if there’s a week when you just can’t get to the store, you will still be able to get by.

Favorite photo from last week:
Saturday night D. hooked up the Wii to the projector and we played large-scale video games outside. It was so much fun! 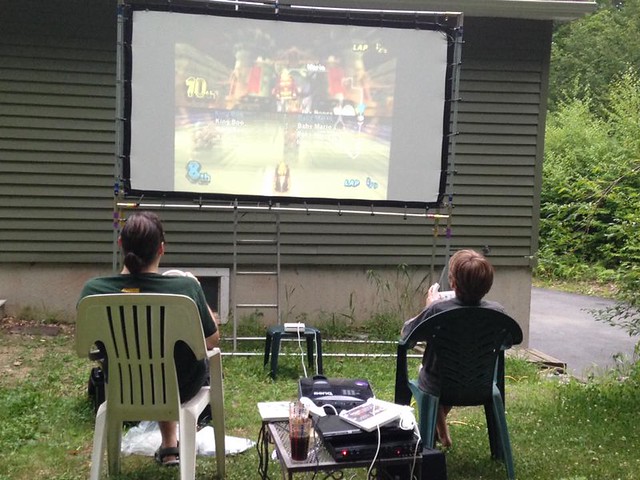 Lesson learned the past few days:
Sometimes it’s better to just keep your opinions to yourself. I’ve learned that there are some people who just have to be right all the time, and it’s not worth wasting my time and effort letting them know how I feel because it will never matter.