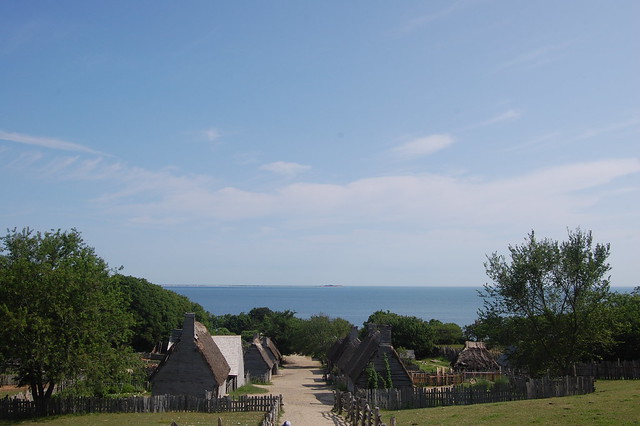 So, it just occured to me that I never blogged about our vacation this month in Plymouth, MA! Although I grew up in Massachusetts, I have never been to Plymouth. (We probably did the Freedom Trail at least three times, though!) You’d think that it would be a standard school field trip, but for some reason I never made it there until this month. With a few free days before my husband started his new job, we decided to go on a last-minute trip.  We arrived in Plymouth on Wednesday, and it was quite overcast and still wet from all the rain earlier in the morning. However, that worked to our advantage because it wasn’t crowded at all! It has been ages since I saw the Atlantic, and it is just as gorgeous as ever.  The kids and I walked along the dock while D. got our tickets for Mayflower II and Plimoth Plantation. 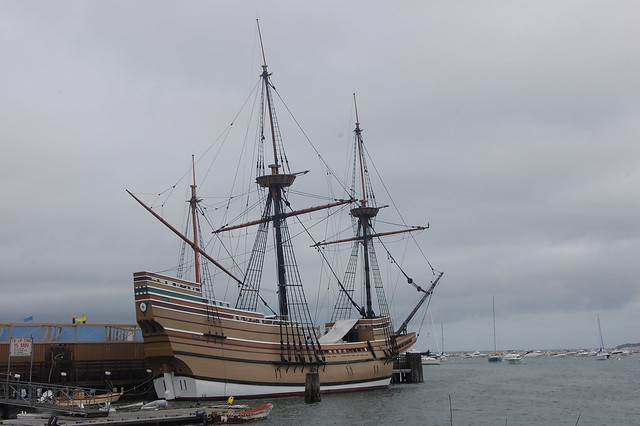 The Mayflower II is a replica of the boat the pilgrims sailed on from England. The ship was constructed in England and sailed to Massachusetts in the 1950s. 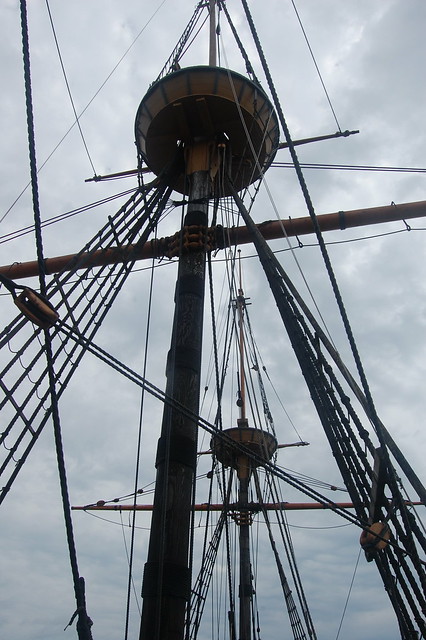 As we walked around and thought about how many people the original Mayflower held, we all were amazed. The ship is not large, and quarters are tight. It definitely gave me a whole new perspective on their journey. I can’t even imagine what those early settlers experienced! 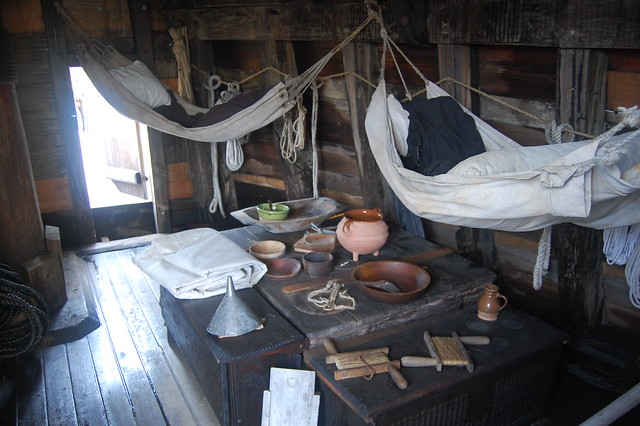 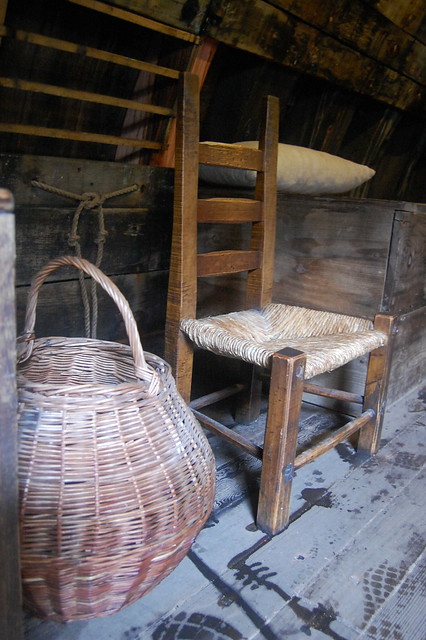 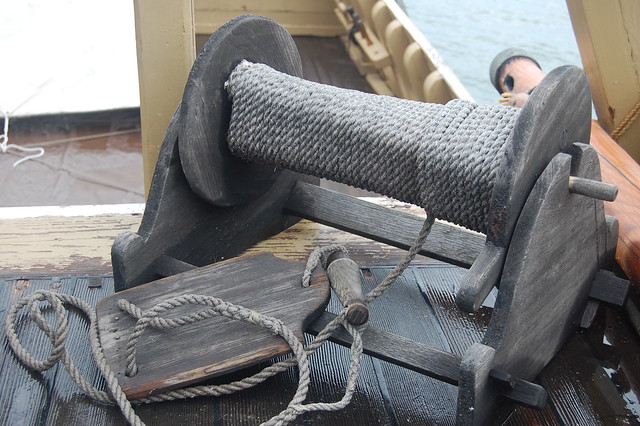 There are plenty of historians on hand who are happy to answer questions. Some are dressed and act as if it were the 1600s and others are just their modern-day selves. 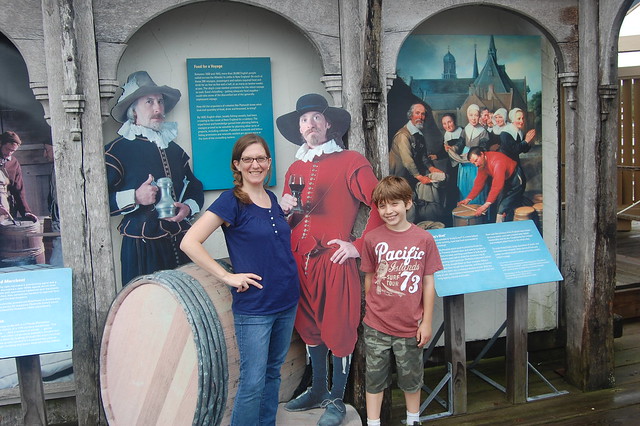 Plimoth Plantation, as you can imagine, was also fascinating! Again, historians walk (and WORK!) around the site, both in period dress and persona as well as modern. There are two parts to Plimoth Plantation — the English village and Wampanoag Homesite. 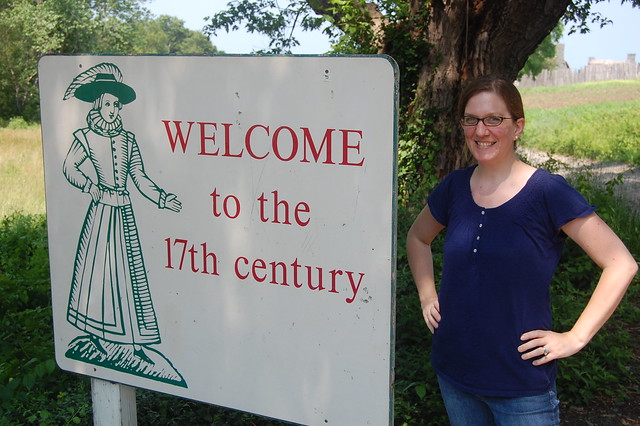 On our first day wandering around, men at the Wampanoag Homesite were making a canoe from a pine tree. They were in the process of burning it out. There were other canoes made on-site that were floating in the water. Quite a difference from our fiberglass Old Town canoe! 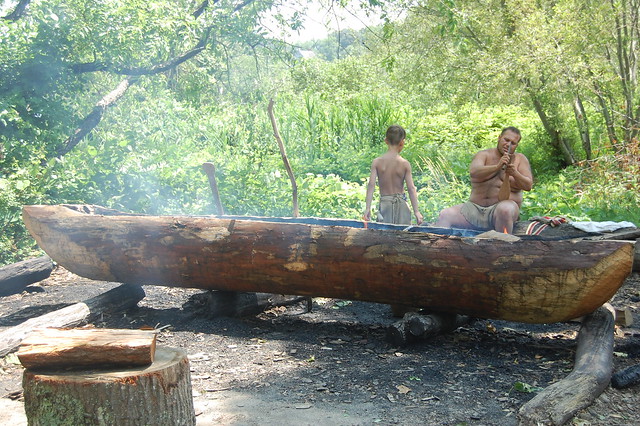 I also learned a lot about what foods they grew and how they grew them. The Wampanoag diet was mostly vegetables — squash, corn, Jeruselem artichoke, etc. Their buildings were amazing to look at — all natural materials, not a nail in sight. 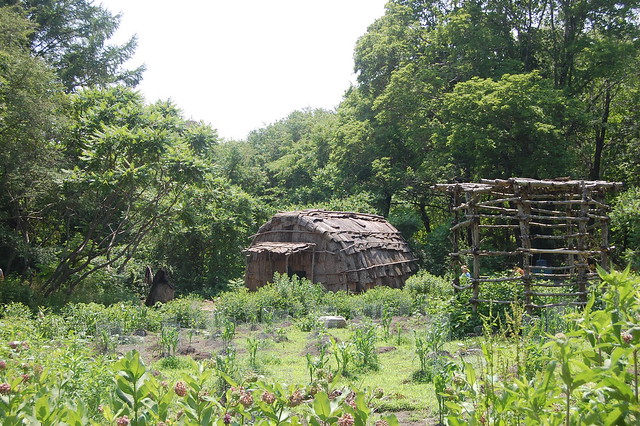 The English settlement was also quite fun. Listening to the historians who talk as if it were the 17th Century, you get a really interesting perspective on what they thought of England, of the Native Americans, and of Plymouth in general. We laughed when someone was complaining to us about all the damn trees! 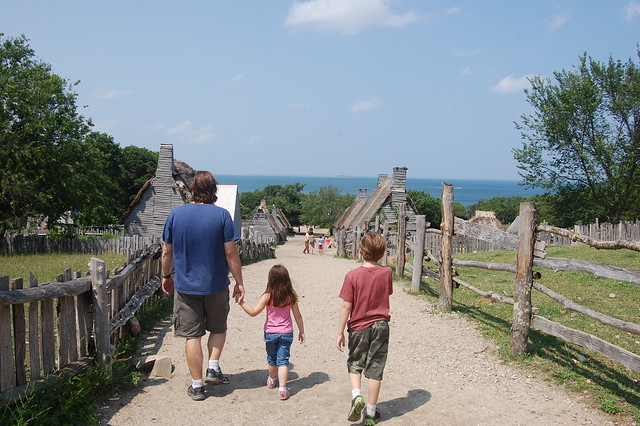 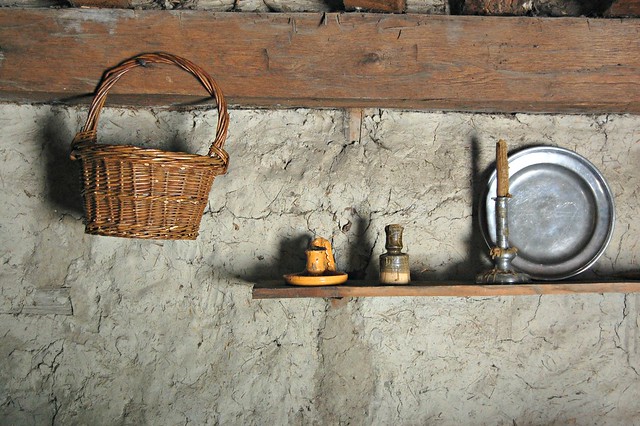 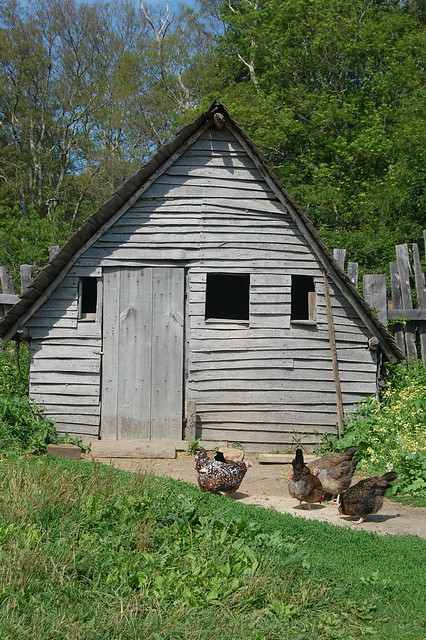 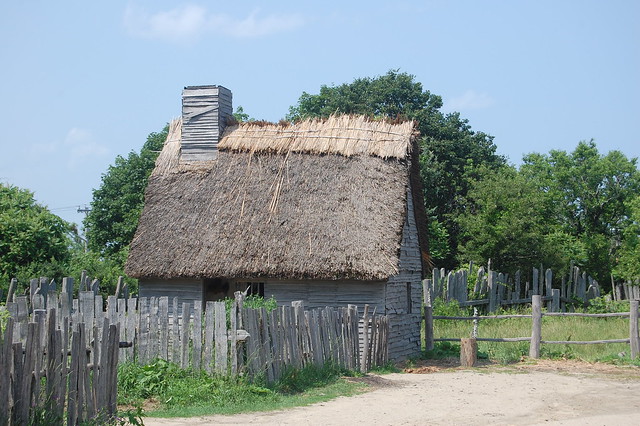 If you have the opportunity to visit, I highly recommend it! Another stunning part of Plymouth is the waterfront. I don’t consider myself a beach person, really. I definitely gravitate towards lakes and mountains, but I think it’s impossible to look out on the Atlantic and not feel an overwhelming sense of calm and peace. 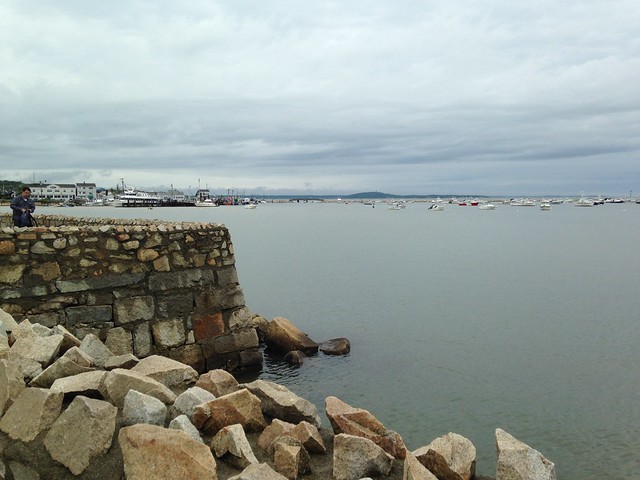 Naturally, we saw Plymouth Rock, as well. Most of the things I’d heard about Plymouth Rock, prior to seeing it myself, included comments like “underwhelming.” Well, I didn’t feel that way at all. Is it an enormous boulder? No, of course not! But let’s remember that this was the 1600s, and the settlers were on a small (yes, really) ship made from wood. Also, you need to consider hundreds of years of erosion! Personally, I thought it was moving to look at this stone and think about the journey these English men, women, and children endured. But maybe that’s just because I have an insane amount of home-state pride. 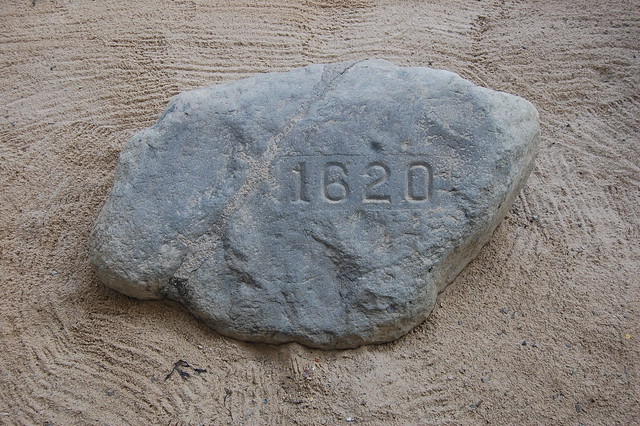 As for the rest of our trip, we got a great deal on a room at the John Carver Inn. What attracted us to the hotel initially is the location and the great pool! Come on – anyone with kids knows that a good hotel pool is key. 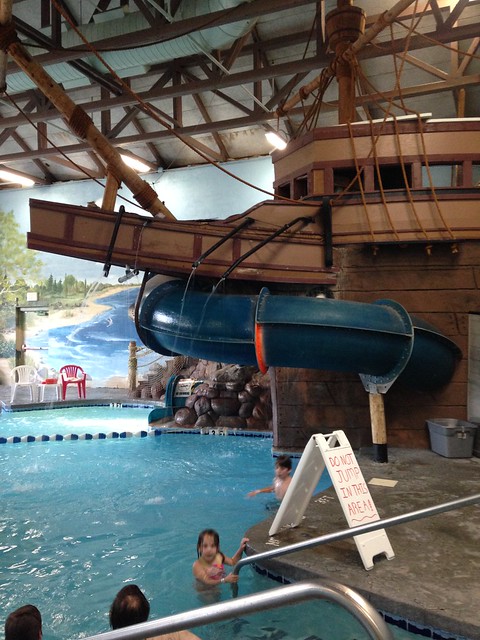 My wonderful husband surprised me on our first night and had some Cava (a bubbly Spanish wine, similar to champagne) and truffles delivered to the room. So sweet! 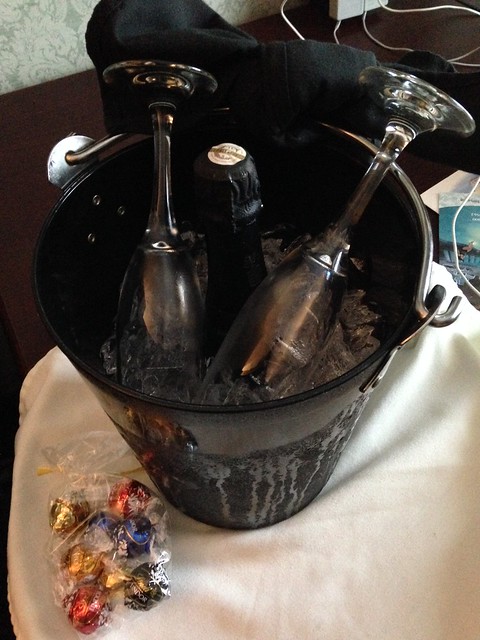 The other interesting thing about the John Carver Inn, is that it is reportedly haunted. From what I read, most of the activity is on the third floor. However, even though we were on the second floor, I am absolutely convinced that I had my own paranormal experience there. D. thinks I am absolutely crazy, but I know what I felt.  It was the middle of the night and L. was sleeping on a cot positioned in between the two beds. I was sleeping facing her, and she suddenly sat bolt upright, which startled me. She seemed to settle herself and quickly fell back to sleep. I also settled back into bed. It was warm in the room, so I only had a sheet at my feet. Just as I was starting to drift off, I felt someone hike up the leg my pyjama shorts! It was super freaky, and a little aggressive. I whispered to D., but he was completely asleep. He’s convinced that I just got tangled up in the blankets, but… I’m not so sure, LOL! Needless to say, the next night I cranked up the AC and wrapped up every inch of my body while snuggling very close to my husband!

We ate at a lot of great restaurants, including the All-American Diner (which had a great breakfast and reasonable prices) and Sam Diego’s (a Mexican restaurant with amazing specials and huge portions). 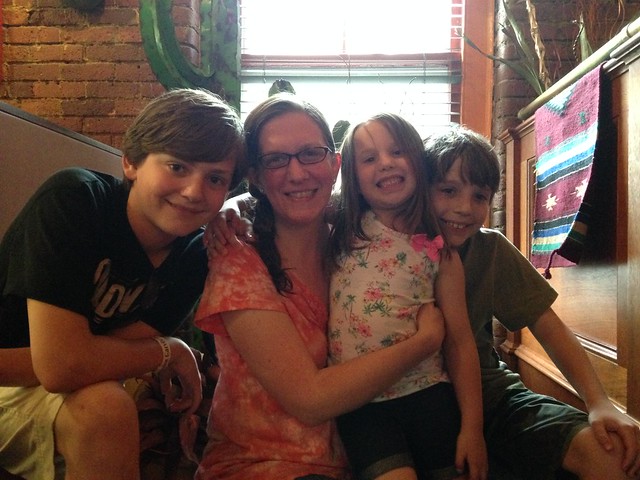 But I think my favorite was the Pillory Pub, right by the water. The served up creative hot dogs and absolutely  delicious clam chowder. We all loved it. 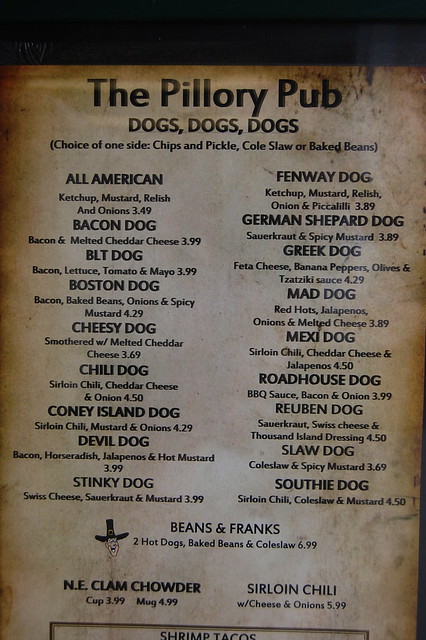 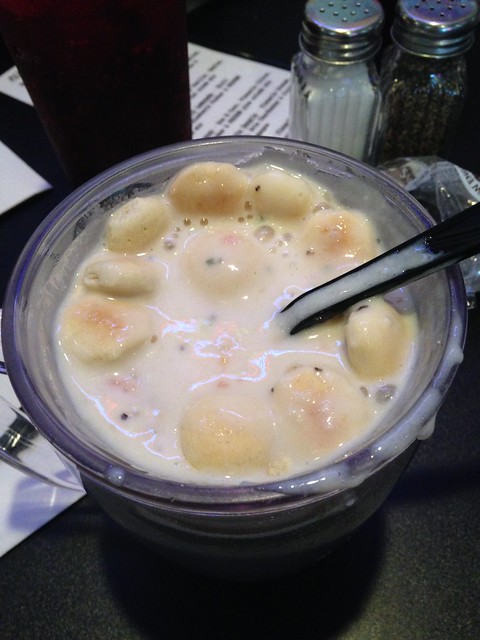 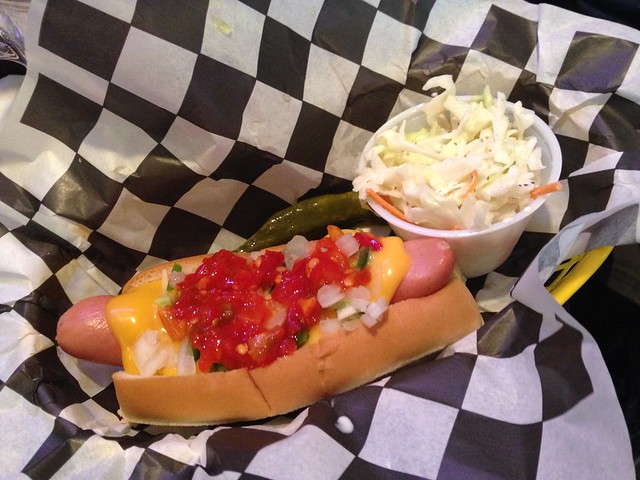 Plus!!! Papa Gino’s has a location in Plymouth! If you’ve never lived in Massachusetts, then you just can’t fathom the deliciousness of a Papa Gino’s pepperoni slice. I’m sure fond childhood memories slant my opinion, but seriously — it’s just cheesy, tomatoey goodness. Just when I thought the trip couldn’t get any better, there we were ordering a large pie, taking our parmesan cheese and oregano to the table, and waiting for our number to be called. Good stuff! 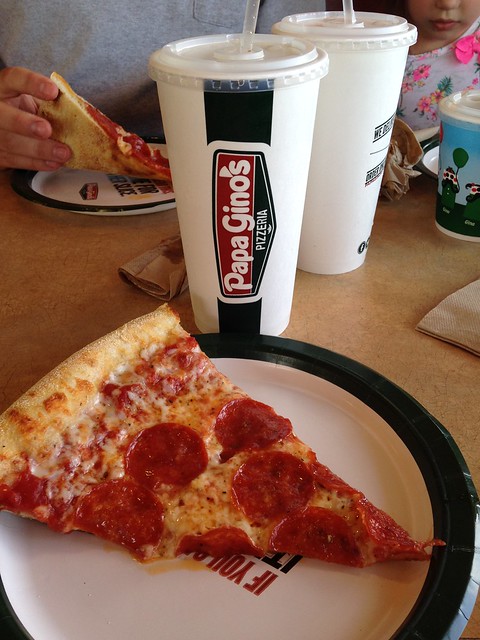 There are lots and lots of cute little shops and boutiques, too. We didn’t browse too many with the kids, but we enjoyed peering in through the windows. 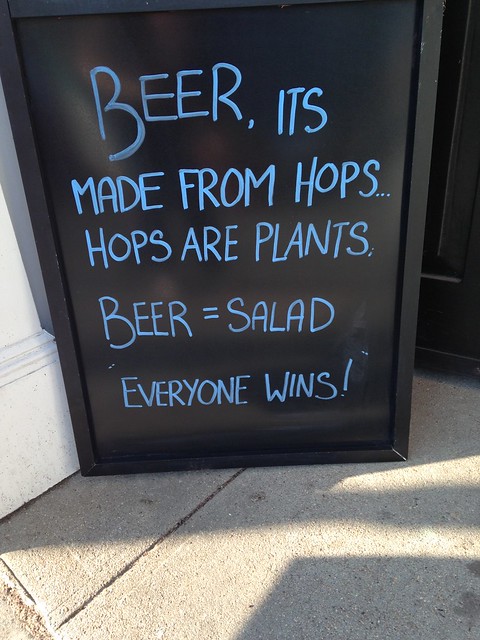 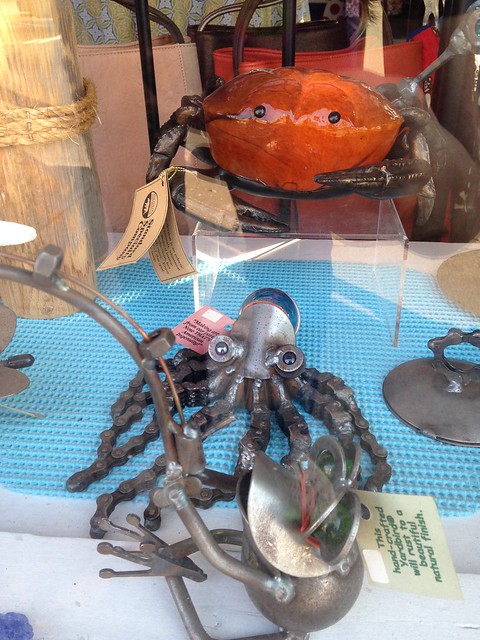 The whole vacation was so relaxing! We had perfect weather and seemed to beat the crowds. When we were leaving, the town was ramping up for the 4th of July and everything was getting busier. It was a great way to spend some family time together before D. started his new job!