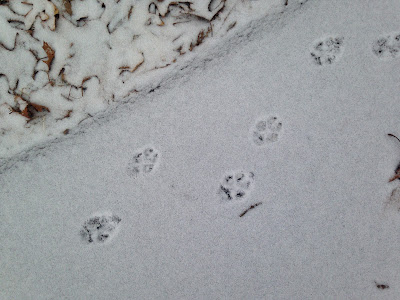 “There’s just something beautiful about walking on snow that nobody else has walked on.”
— Carol Rifka Brunt

It snowed last night (though hardly the 2″ I was expecting). In fact, it was just enough to lightly cover the ground. Nevertheless, it was also just enough to let us know that a fox was trotting around early this morning. At least I’m pretty sure it was a fox. My tracking skills are not the greatest, but comparing the prints to images online, and knowing that there are plenty of foxes around, I think it’s a pretty good guess.