I love a day when almost everything gets checked off the list! I didn’t get to organizing my crochet works-in-progress but I still got a LOT done. Love having Wednesdays off from work (we’ll sort of off — occasionally a meeting has to happen like tonight).

Oh, and if you’re wondering why I just include work meetings in this planner but not work to-do’s, it’s because I have a separate task list notebook at work. This is my catch-all planner where all appointments, meetings, etc. go (in addition to my Google calendar) and it’s where I jot my personal to-do’s. I plan out way ahead in Google, but usually just a month at a time on paper.

My planning method changes, but this is what works for me right now!

It’s August! We don’t start until after Labor Day here in New York, but back-to-school prep is in full swing. I know many other areas of the country will be heading back to school very soon. I’m not one to leave things to the last minute, so the other day I purchased as much of my kids’s school supplies as possible. As I’m starting to get organized for the new school year, and I find that pre-printed School Notes are an invaluable time and sanity saver.

With three kids in school, you can only imagine how often I have to send in a note about a bus change or a dentist appointment. By using these handy notes, I can just jot down the important info, check a few boxes, and voila! It streamlines the entire process. 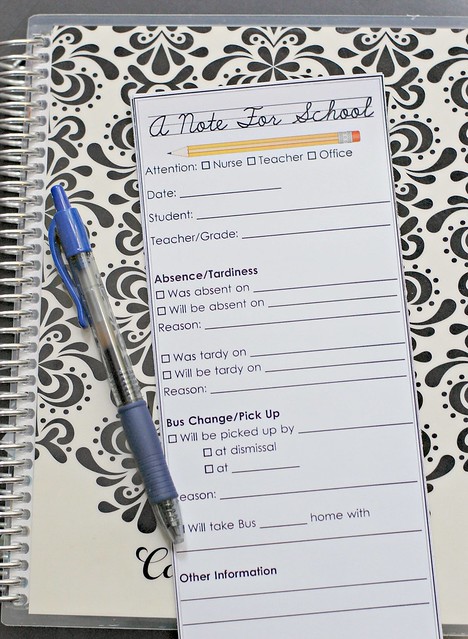 I designed these notes a few years ago and I still use them. The graphics are not too embarrassing for my high school sophomore, and the skinny, vertical orientation means that they don’t get lost in binders or homework folders. (My kids use folders to carry school papers back and forth and smaller notes, I have learned from experience, tend to get lost or forgotten if you can’t immediately see them. But it’s hard to miss a tall note like this one.)

I’m happy to continue to share these notes with my readers as a freebie. I like to keep a small stack printed, cut, and easily accessible — your planner or home management binder are great spots! They are not terribly fancy, but they are functional, and I think you will agree — they are a real time-saver!

It’s no secret that I am a huge fan of Erin Condren products. Up until now I have never gotten in on all the excitement of “launch day.” However, with the new horizontal layout option that’s available, I couldn’t help but jump on it!

My current Life Planner goes until the end of the year, and I don’t plan on giving that one up. I’m going to continue using that one to keep track of my family’s schedule and I’m going to use my brand new, shiny, horizontal LP as a journal and personal goals planner. So do you want to know which design I picked?

I have admired the foil planners in years past, but never really felt the need to have one. But this year? With personalization in metallic foil too? Oh yes! I had to have it. I fell in love with this color (peacock), and the decision was pretty easy. I can’t wait to get it — you can be sure that I’ll share every detail with you!

In the meantime, if you’re considering an EC Planner, you can sign up for an account using my referral link. You’ll get an e-mail with a coupon code for $10 off your first purchase of anything on her site. I’ve always been happy with the Erin Condren products I’ve ordered, and this will be my fifth Life Planner, so I feel good recommending it as an organization tool!

Well just like that a couple weeks go by and you forget all about blogging! Actually, it’s been on my “to do” list for several days now, but I just have been too busy to get to it. I know I keep saying that I’m really going to pay more attention to my blog, but with the back-to-school schedule ironed out and things moving along nicely, I really mean it!

In the meantime, how about a laundry list of what’s new?

Hope your September is off to a great start! Ah, the boys are back at school today and I am easing into my regular routine. I had such grand plans to redesign my blog header, update my sidebar, etc. etc. in time for the new year, but… sometimes things just don’t work out, LOL!

Yesterday morning Laura was feeling under the weather, then since she seemed to feel more like herself as the morning went on we went out to Chili’s for lunch and I ran to Joann’s while D. hit the comic book store. Then I tried to make sense of a diaper cover pattern for some photography prop sets I’m working on, and before you know it — bed time.

But it’s a new day! And I have so, so, so much to do. The laundry piles are ridiculous, I have to go through everyone’s closets and figure out what to keep and what to donate, and I need to finish up the previously mentioned infant set and get the sample mailed out to make sure the sizing is correct. (Don’t worry, I’ll post a pic when it’s done — these are so ridiculously cute!)

I feel this urge to clean, to reorganize, to do like a million different craft projects, to plow through my stack of “to be read” books. But I know I can only tackle one thing at a time, so I’ve written up my to-do list for the week, including the projects in the free calendar from My Simpler Life. Instead of printing it out and creating yet another pile of paper for myself, I’m hoping that having the tasks written down in my planner will help me get them done.

And with that, I really should get off the computer! Here’s to an excellent new year!!!