I’m going to be perfectly honest with you: I do not have awesome self-esteem. Like I wrote in my last post, I’m always comparing myself to others, seeking perfection (which, really, can almost never be obtained). In this age of social media, it’s so easy to let yourself feel down about whatever particular interest is important to you at the moment. Trying to lose weight? Someone will always work out harder, weigh less, eat better. Into decorating your planner? Someone is always going to have more money to buy nicer embellisments, have neater handwriting, be more organized. It doesn’t end, does it?

So when I really started practicing Copperplate, I was caught off-guard by how incredibly welcoming, helpful, and encouraging the online calligraphy community is (especially on Instagram). Artists freely share information on Periscope, they answer your questions, they will demonstrate a stroke or a letter multiple times so you understand. It is so very cool and so refreshing! And I think that’s what’s kept me working on it even though I am far from great. As the saying goes, “Don’t compare your Chapter 1 to someone else’s Chapter 20.” We all have to start somewhere and keep plugging along.

Since I’ll be spending all day at a workshop tomorrow studying the fundamentals of Engrosser’s Script, I thought it was a good time to compare where I am right now to where I was a few months ago. When I first brought home my dad’s old dip pens, I fooled around a little bit, wrote out a Richard Brautigan quote, and then got frustrated and put them away for quite a while. That’s the example on the top. Underneath is an example that I wrote in December 2015. Markedly better, but no shade and a lot of improper letter forms. 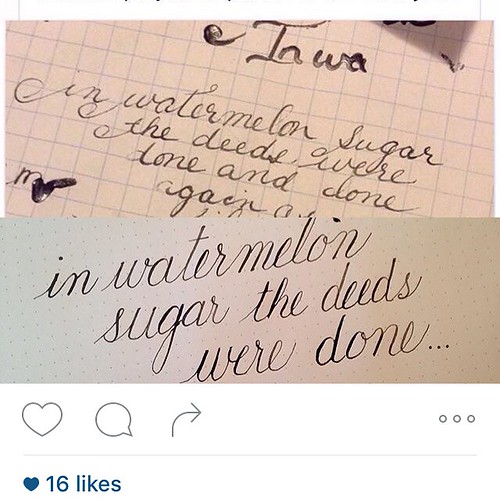 And here’s the sample I wrote out this morning. Still so far from where it needs to be, but much better than just a few months ago! 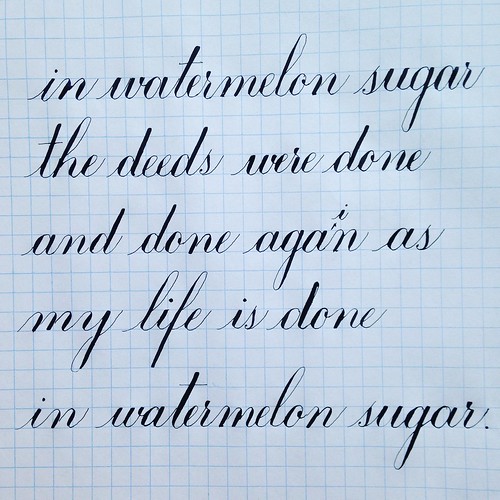 It is definitely encouraging and a good way to remind myself that I’m making improvements every time I pick up that pen. I know that having instruction from two incredibly talented calligraphers (David Grimes and Joi Hunt) is going to make a big difference in my work. I’ll be sure to let you know how it goes!