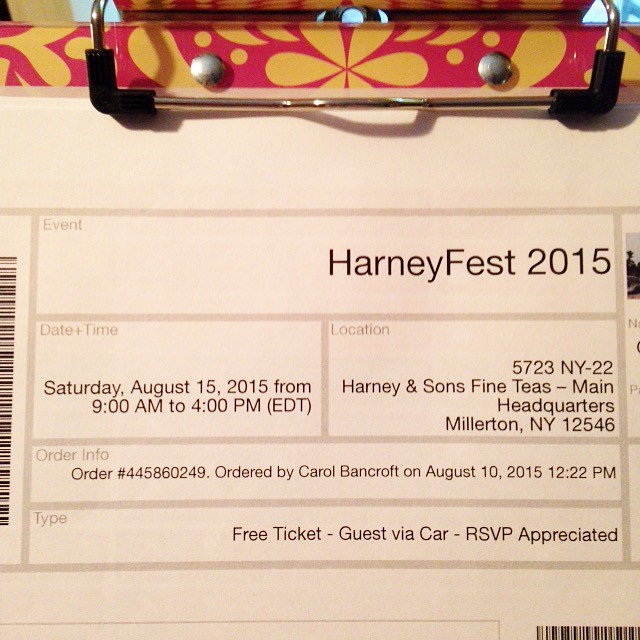 As you know, I love tea. I mean, I really love tea. A few weeks ago, a friend mentioned something in passing about some sort of festival at Harney & Sons Fine Teas. Lucky for me, Harney is a local company, located only about 30 minutes away. I immediately clicked on the link to the Facebook Event to learn more information. Oh. My. Word. It was a free (FREE!) tea festival! There was no question — I had to go.

Immediately, I messaged my friend and fellow tea-lover, Kelly. Since we met during our days at UMass, we have enjoyed many cups of tea together, shared info about new tea shops, and generally geeked out over a good cuppa. We made our plans to meet up and counted down the days until August 15th. Because the kids had two different parties on Saturday afternoon, we decided to meet up bright and early. HarneyFest started at 9, so we were one of the first people there. It got really busy by the time we were wrapping things up, so I would definitely go early next year. 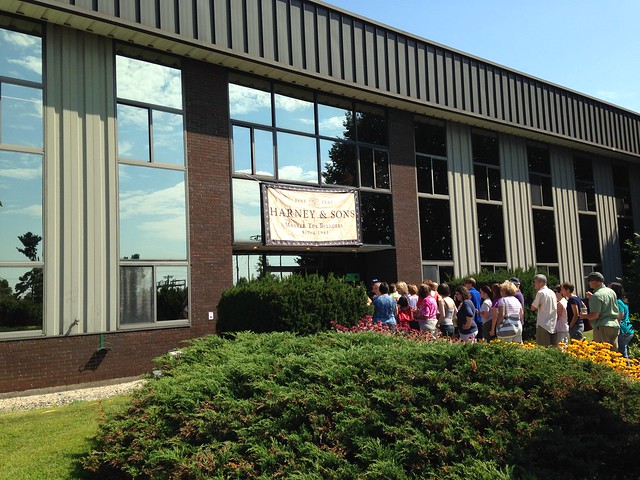 There was a variety of things to do including  tea tastings, a tea ceremony, and blending your own tea. Although the entire event was free, you did have to sign up for everything you wanted to do. This was not immediately clear to us, so we missed out on a couple things. Nevertheless, we started out with the factory tour, which was probably the main thing I wanted to see.

Harney moved their headquarters from Connecticut to here in the Hudson Valley a few years ago. The facility is huge and the pictures I took really don’t show the enormity of it. When we stepped inside the factory, I was just overwhelmed by the stacks and stacks and stacks warehousing bags of tea, just waiting to be blended, bagged, and packaged. They do it all right there, which is pretty cool! 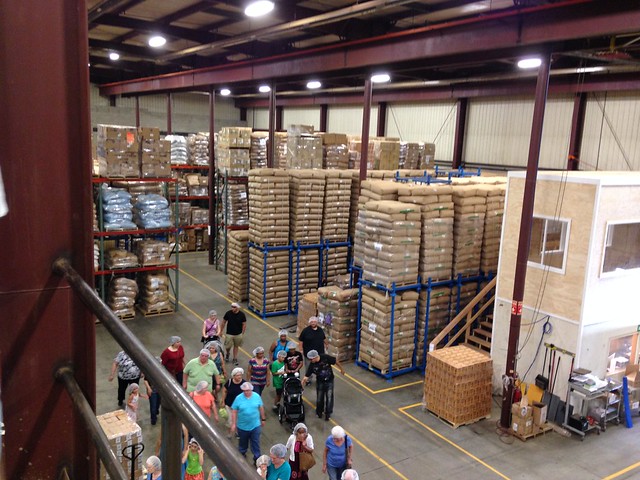 We had the chance to see the production lines in action. We saw silk sachets formed, filled, and tagged. We watched single-serve bags produced. We even got to see how they seal up the tea tins. I am fascinated with manufacturing (in part, I’m sure, because I grew up in a manufacturing town), so watching all of this was really cool. 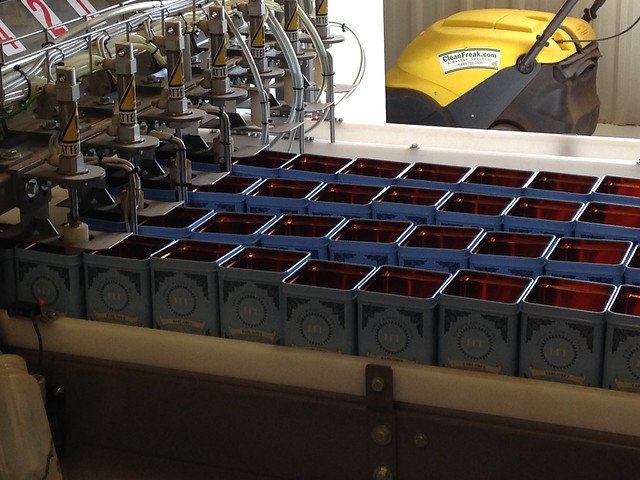 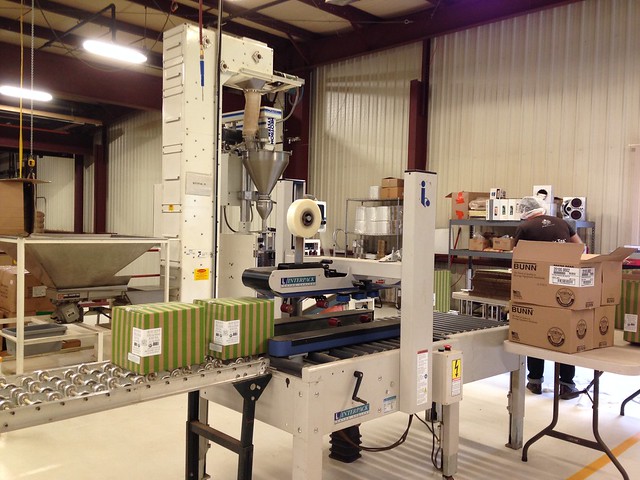 The other super fun thing Kelly and I got to do was create our own tea blend. Yes, it’s exactly what you think! We donned our very fashionable hair nets and made a couple “I Love Lucy” jokes about feeling like Lucy and Ethel. 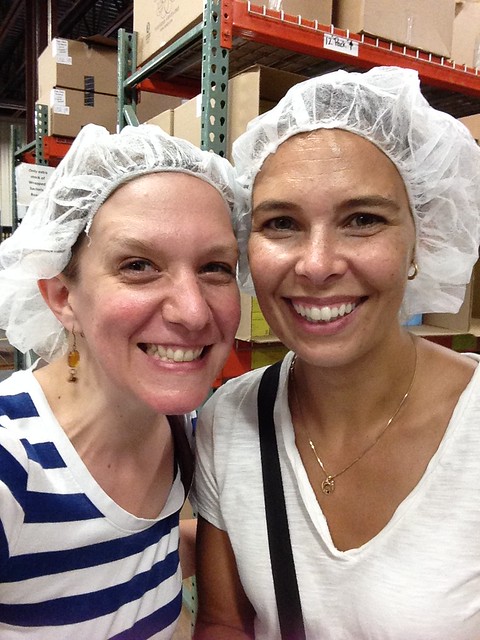 There was a table set up with a few tea bases, and several flavoring additions. Honestly, I didn’t know where to start! I finally decided on a rooibis base and I added apple, cinnamon, orange peel, and some coconut. The coconut was an impulse addition, and I’m not sure how it all will taste, but I’m hoping it will work. After we added our goodies to our tin, we brought it over to a Harney employee who blended it all together and then labeled and sealed our tins. I hasitily decided to call mine Carol’s Tropical Harvest Blend. I’m looking forward to brewing a pot of it once this weather cools down! 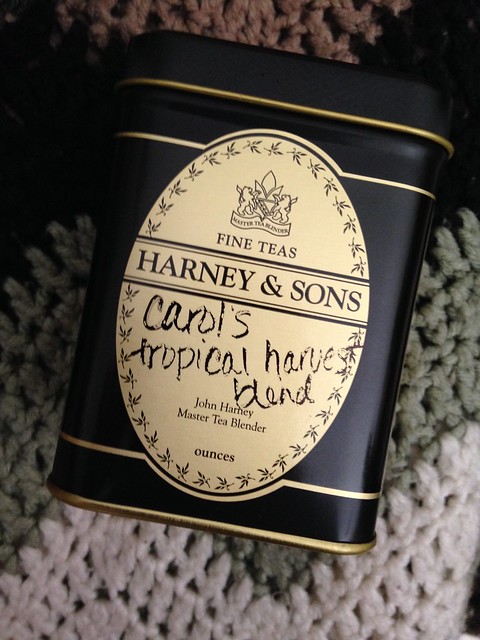 Of course, there was a little shopping to be done. Honestly, I didn’t really  need much tea, and the flavors I was really looking for were not available at the tent sale, but of course I found a few things: their chai teabags, a tin of Chocolate Mint sachets, and a tin of Paris sachets. I am such a fan of tea lattes made with Paris, steamed milk, and a little sugar-free vanilla syrup. I also couldn’t resist this beautiful enamel Nina Jarema tea/coffee pot. The woodland pattern just called to me, and it was the only one I saw. 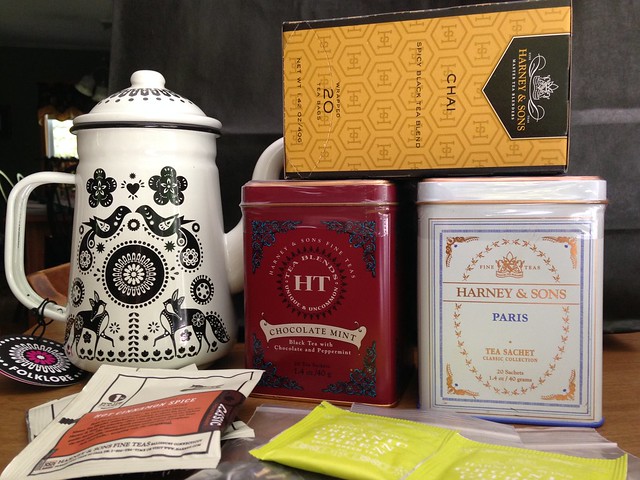 There were a couple food vendors there, so we decided to grab lunch before we departed. There was a little booth serving up Mexican food that we decided to try. A couple people were getting tamales, and I never had one before so I figured this was the perfect opportunity! It was so delicious I just had to get a second (along with a chicken taco — yes, I went a little overboard, but the yumminess was hard to resist). I wish I knew the name of the vendor so I could give them a little shout out! All I know is that she told me she’s often at the Millerton and Amenia farmers’ markets. The food was cheap, filling, and tasty. She also had a nice variety of homemade salsas. If anyone knows the name, please comment and let me know! 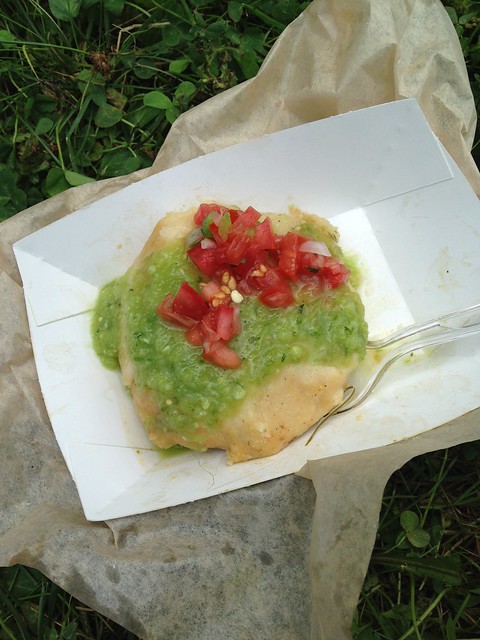 The absolute best part of the day, however, was getting to spend it with my good friend. Kelly and I don’t get together anywhere near as often as we’d like. In fact, before Saturday it had been well over a year since we had the chance to hang out. The awesome thing about your best friends though, is that no matter how much time passes, you pick up just like it was yesterday. There is no one else who would have jumped for joy over tea with me (yes, I literally jumped when I learned I could make my own custom blend), and I’m so thankful we were able to make this happen! 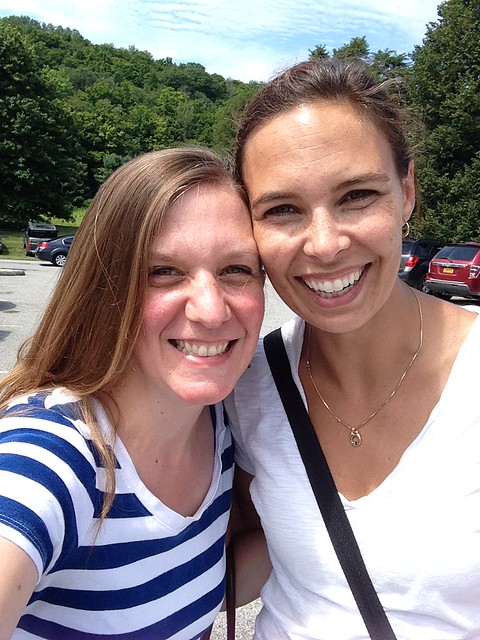 HarneyFest was such a fun event. The company was generous with samples, the employees were super friendly, and I really hope they do it all again next year because I will definitely be there!