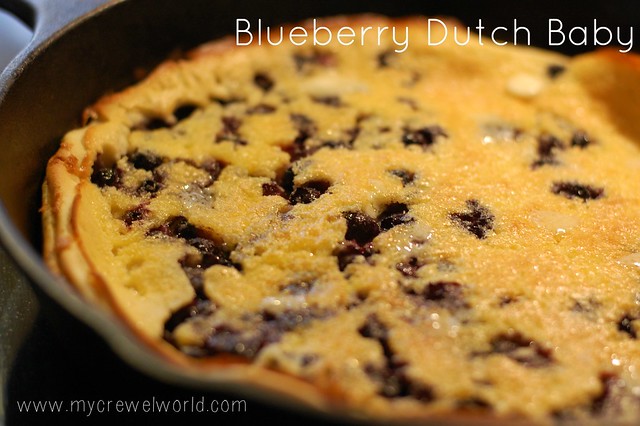 I first read about Dutch Babies years ago. I am pretty sure I clipped a recipe out of a very old “Taste of Home” magazine and filed it away. I never got around to making it. Last weekend we were watching an episode of “Bob’s Burgers” and somehow Dutch Babies were involved. My husband laughed  and thought that a Dutch Baby was some sort of joke. I explained that it was for sure a real thing! There was no no question: I was finally going to make my Dutch Baby. I looked through several recipes and finally settled on one to use as a base.

A Dutch Baby is sort of like a pancake, sort of like a clafoutis. It’s light and custardy and (as I would soon learn from my family) is not for everyone. While I thought it was heavenly, the kids were not as impressed. They probably would have preferred regular pancakes or a blueberry coffee cake. Nevertheless, I thought it was delicious and will make it again — even if it means I have to eat it all by myself!

Preheat the oven to 425 degrees F. Melt 2 Tbsp. butter in a medium-sized cast iron skillet. (I did this by simply putting the skillet in the oven while it heated up. Just keep an eye on it so it doesn’t burn!)

In a blender (or large Magic Bullet cup), combine eggs, milk, flower, vanilla, salt, and 1/2 cup of sugar. Blend until the ingredients are well-combined and the batter is slightly foamy.  Remove the skillet from oven and add the blueberries. Then pour the batter into the skillet. Bake for about 20 minutes until the panacake is puffy, slightly browned, and the sides have slightly pulled away from the pan.

Dot the last tablespoon of butter onto the top of the Dutch Baby and sprinkle with the tablespoon of sugar. Slice into wedges and serve. 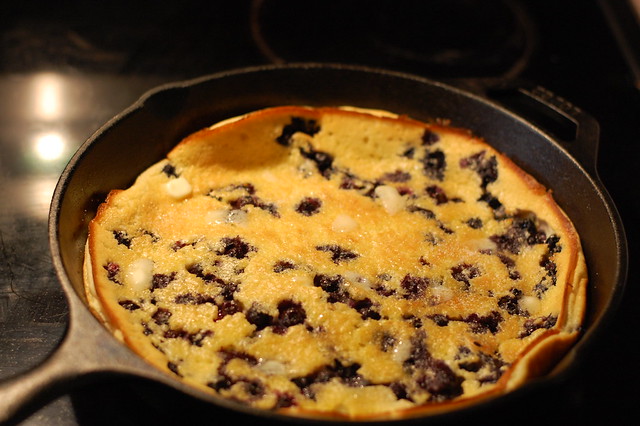